Charity Just Like Us teamed up with Birmingham Pride to run an educational school event, which has been praised by school pupils as helping them “to not feel so alone” and show that LGBT+ young people “are loved too.”

More than 50 pupils and teachers from five secondary schools across the West Midlands attended the event, which school staff called “life-changing” for young people.

Just Like Us ambassadors gave a talk to the schools about their experiences growing up LGBT+ and why allyship matters. They also heard from the Birmingham Pride team – including Char Bailey – about the city’s diverse history, had a Pride brunch, made signs and then headed to join the march.

As Birmingham Pride celebrated its 25th anniversary, for many young people, it was their first time attending any kind of Pride event.

School pupils on how the event helped them

Rebecca, a Year 11 school pupil, said: “This is my first time at Pride and I just thought it was really cool seeing everyone here being themselves. It’s really inspiring and makes me want to be comfortable in my own skin. I think it’s really important because everyone deserves to not feel so alone and feel loved in every environment they’re in.”

Beth, another year 11 pupil, said: “I just really liked seeing all the people and relating to people because sometimes it can be hard to find people who are like you or going through the same things as you.”

Sue Laffey from Stourport High School in Stourport-on-Severn said: “I want the young people of today to be able to celebrate their identity in a way they wouldn’t have been able to do when I was their age.

“If students of today aren’t able to stand up and say ‘this is me, this is who I am’, then what on earth are we educating them for?”

“I’ve been teaching for 34 years and it’s changed beyond recognition because when I started in 1988 that was when Section 28 came in. So to even mention the word homosexual or gay, I just couldn’t do it. You weren’t allowed to mention it whatsoever.

“So to be able to move from that to this, where I can openly talk about LGBT+ rights and identities and issues with a bunch of young people – openly and legally – is like chalk and cheese. It’s like a different world. The event has been amazing, I don’t think I’ve ever been in such a joyful environment of celebration, support and friendship, it’s just amazing.

“If students of today aren’t able to stand up and say ‘this is me, this is who I am’, then what on earth are we educating them for?

“We’ve got to educate people to live their lives in the best possible way for them. And if you’re LGBT+ and you want to be able to identify as that – perhaps you’re not able to do that at home because your family isn’t so supportive – schools have to provide that supportive place for students to be able to be themselves and grow into themselves as adults.

“We will definitely be developing on this and I hope that Just Like Us will run this event again and that we carry on allowing LGBT+ students to grow. Go Birmingham Pride!”

‘My first time at Birmingham Pride’

Aaliyah, a Year 11 pupil who attended, said: “It’s been amazing – all of it. It’s my first time at Birmingham Pride, it’s been so fun to have such a community spirit. I think it’s important to have these kinds of events to show pupils that there are so many different kinds of people out there. The diversity is amazing and it’s important to show students what life is about.”

School pupils also had the chance to write postcards with affirming messages to themselves. One pupil wrote: “Dear younger me, you are not alone, there are people just like you that you can talk to. Things will get better.”

Naomi from Woodrush High School said: “I thought it was an amazing opportunity for our students who are part of our Pride Group at school already just to have them see the kind of community that’s out there. It allowed them to be out, proud, confident and value. The event has been amazing – the talks were so lovely and affirming, it was really nice to hear people’s experiences. We don’t get to do this kind of thing very often so it was really amazing.

“We’ve made a lot of progress but we’ve still got a long way to go. It’s important for pupils to know what’s come before, all of the work, that people are still fighting for their rights and looking out for them. I hope the pupils will take away that they have a community out there, they feel valued, they have allies and they should be proud to be who they are. They’ve absolutely loved it.”

Leanne Taylor-Harte from Biddulph High School near Stoke-on-Trent said: “I think it’s a great opportunity for pupils to come and experience Pride, meet people from the community, and learn something in a way that we never got to growing up.

“I think it’s important for them to see that there’s people similar to them and also if they don’t identify as LGBT+, to be an ally and support people that might not have realised they have a voice until they came to an event like this.

“I think this event will make lifelong memories and something they’ll take with them into the rest of their lives.”

Ruby, a Year 9 pupil, said: “It’s so fun, I’ve always wanted to come to Birmingham Pride. I think it’s important to prove to people that we’re here and important too.”

Matty, a Year 9 pupil, added: “I was so excited, very, very excited about this. It’s been really fun and I’m really surprised at how many people there are. I’ve learnt how we can celebrate differences between us and that we are loved too.”

Isabel, year 11: “I love Pride so much. I feel so included and loved. It’s my first time at Birmingham Pride and I’m 110% coming again – it’s the best thing ever. Be an ally!”

Dominic Arnall, Chief Executive of Just Like Us (the LGBT+ young people’s charity) said: “At a time when our independent research shows LGBT+ young people are statistically twice as likely to be lonely on a daily basis, we are incredibly proud to have created an event where young people can learn about diversity and say they have felt less alone for the first time in their life.

“It’s incredible that these young people have been able to see that there are other people like them and, fundamentally, that who they are is nothing to be ashamed of.

“The event has been a fantastic success. It was a chance for school pupils to learn about the diverse history of the city they live in. We’re delighted to have teamed up with Birmingham Pride to show young people that being LGBT+ is something to be celebrated.”

If you’d like to help Just Like Us, the LGBT+ young people’s charity, to support more school pupils, please make a donation now. 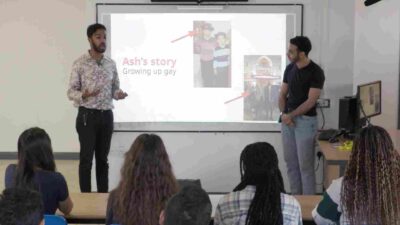 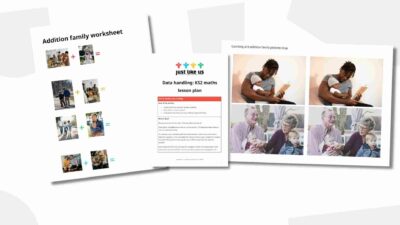