LGBT ambassador Arber shares his experience of volunteering on Just Like Us’ Ambassador Programme.

I remember initially signing up to volunteer with Just Like Us. I’ll admit that I was nervous and kind of anxious, but excited about what this new chapter meant for me and my identity.

Looking back now, I did not know that nearly three years later I would be in the position that I am now.

I had no idea that I’d one day feel content with my identity. I also had no idea what it’d be like to provide much-needed representation to minoritised LGBT+ young people.

My parents are from Kosovo, and I was raised in a Muslim household. As someone from an ethnic and religious minority background, I often felt like I was the “only one” to be LGBT+ and encompass these diverse identities.

The only type of gay and Muslim representation I remember growing up was Syed in Eastenders. His experience was so turbulent and this only scared me more.

Growing up, I actively focused on hiding aspects of who I was. This is because I thought that expressing myself openly would lead to being shunned by my culture, faith and family. Those things are all so important to me, so I was terrified of what would happen if I were found out to be LGBT+.

This lack of intersectional representation of LGBT+ people made me feel as though my identities could not co-exist.

I felt like I would have to “give up” on my culture, and my history, to be included within the LGBT+ community.

This was an internalised battle I was fighting up until my early 20s, and sometimes still grapple with today.

But I decided I needed to become proactive. I felt the need to share my experiences so that others can also know the diversity of the LGBT+ community.

That’s when, as if it was fate, I saw Just Like Us pop up on my Facebook. I loved the idea of being my own representation and volunteering to help improve the lives LGBT+ young people in secondary schools.

Attending ambassador training allowed me to be immersed in a space where – for the first time in my life – I could just exist without having to explain my identity.

Now I’ve been volunteering as a LGBT ambassador with Just Like Us for three years. I’ve encountered some amazing experiences that have truly enriched my life.

I remember going into a secondary school in Camden and telling everyone my story. Seeing many of their students’ eyes light up, as I talked about my experiences growing up LGBT+, was wonderful. That just encouraged me more to do the work that I do.

That London school also happened to have a Kosovar Albanian teacher working there. He very positively greeted and commended me on the work I was doing – despite knowing the complexities that exist within our culture. It was extremely self-affirming and broke down some of the ideas that I had developed within my own mind about members of my culture.

Volunteering with Just Like Us has allowed me to speak in schools to a diverse range of students. Many of the students I’ve spoken to felt alone. They thought they were the “only one” of their cultural, racial, ethnic and/or religious background to be LGBT+. I’m so glad to help change this.

Just Like Us has allowed me to be the representation I never had when I was younger.

The main focus of my talk in schools is always about affirming that identities do not have to be mutually exclusive. I talk about how you can exist with your faith, your culture, and your LGBT+ intersectional identity.

It’s so important that the next generation learn that you do not have to give up on any aspects of your identity to be LGBT+.

LGBT ambassador work outside of schools

My time volunteering as an ambassador has also extended beyond just delivering school talks. I’ve also been able to attend and speak at important panel discussions. And I’ve taken part in their podcast series and written articles for outlets like Gay Times.

As a history nerd currently studying a Masters in Gender, Sexuality and Culture, volunteering has also helped develop my understanding of LGBT+ issues.

I didn’t initially think that joining Just Like Us would enhance my life as much as it has.

Just Like Us has allowed me to be the representation I never had when I was younger. Being an ambassador has fulfilled a deep longing I’d had internally for many years.

I’ve also met some amazing individuals, who I today consider to be some of my dearest friends.

Although I nervously and very anxiously signed up in 2019, not thinking it would do much for my life, I am forever grateful that I did.

I am proud of myself for going against the grain and being the representation that young people need. I’m so glad I will have helped young people feel positively affirmed in their diverse identities. So that they will know that there isn’t just one way to be LGBT+. 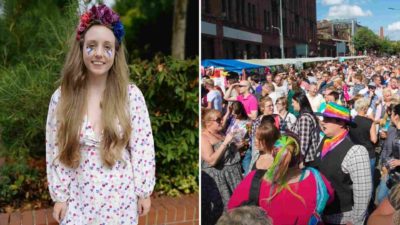 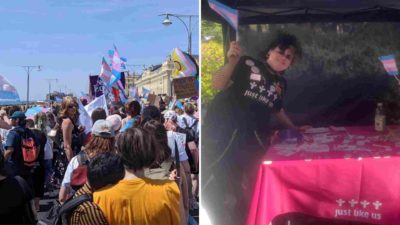