Thousands of schools across the UK celebrated School Diversity Week 2022, including a record number of primary schools.

What is School Diversity Week?

School Diversity Week is the UK-wide celebration of LGBT+ equality in primary and secondary schools.

We organise the event every June. By signing up to take part, school staff can get access to free educational resources.

Primary and secondary schools celebrated in variety of different ways, with help from Just Like Us’ free resources.

Schools ran assemblies, lessons and Rainbow Ribbons fundraisers and more, in order to show that anti-LGBT+ bullying has no place in their school. Some schools also had talks from Just Like Us.

Many schools have also taken part in Rainbow Friday, a dress-up day that fundraises to support Just Like Us.

In primary schools, the week is about diverse families, kindness and respecting difference. For example, pupils learnt that some people have two mums or two dads.

More than 60 primary schools across the UK also took part in a writing workshop, led by author Benjamin Dean on Monday.

Benjamin Dean is the author of The Secret Sunshine Project, a children’s book about a family that goes to Pride.

The author spoke about his journey to becoming an author and also answered questions from pupils. Pupils then created their own stories as part of the workshop run by Just Like Us.

St Stephen’s C of E Primary School in London was one of many schools taking part.

Rebecca Handley-Kirk is the Principal at Norwich Primary Academy. She explained: “The impact on pupils has been profound.”

“Children really think before they speak now. They’re thinking about the joking language that they used to use and it isn’t being used anymore. We’re not having homophobic language used on the playground.”

Mortimer Community College, near Durham, is among thousands of schools that also took part.

Joanne Thornton is the Deputy Headteacher. She said: “As a school we are committed to ensuring everyone feels included.

“Everyone is diverse, we are all unique. Mortimer wants to promote an environment that invites, encourages and supports those differences and guarantees an inclusive, diverse and safe environment to learn and grow.”

Beauchamp College in Leicester and Queen Mary’s High School near Birmingham are also among the schools that celebrated. We filmed a video with the schools to find out why it matters.

Independent research has found a link between LGBT+ inclusive education and pupils having better mental health.

The research also found that 42% of LGBT+ school pupils have been bullied, which is double the number of non-LGBT+ pupils. They are also twice as likely to have depression and be lonely than their peers.

A recent independent survey of 1,001 UK parents also found that 82% of parents believe it’s ‘important’ for children to ‘learn that different types of families exist (e.g. LGBT+ families, such as gay parents)’. 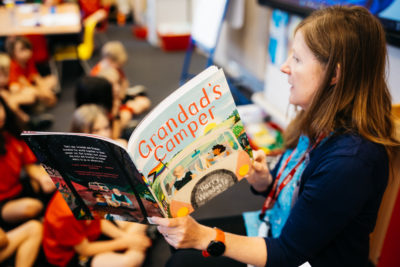